“I am happy to endorse Assembly Member James C. Ramos for re-election. James continues to stand up for law enforcement officers in our community,” said SheriffMcMahon.

Ramos served as a Supervisor of San Bernardino County from 2012 to 2018.

“I’m honored to have the support of San Bernardino Sheriff McMahon,” said Assemblymember Ramos.  “We worked well together during my time on the County Board and I will continue to work with him and other law enforcement leaders to keep our communities safe.”

Assembly District 40 includes the cities of San Bernardino, Redlands, Highland, Loma Linda and Rancho Cucamonga. Ramos won the 40th Assembly District in 2018 by 19%. Governor Gavin Newsom won the district by over 7%. The latest voter registration numbers show that Democrats have a 10% registration advantage. Read more about campaign at www.jamesramos.org.

“Throughout his years of public service, James Ramos has consistently stood strong with the men and women of SEBA who work diligently to protect our communities,”said SEBA President Grant Ward. “We stand with James in re-election campaign to the State Assembly 40th District.”

Ramos served as a Supervisor of San Bernardino County from 2012 to 2018.

“I’m proud to have the support of local law enforcement and have continued to work closely with them during my time in the Assembly,” said Assemblymember Ramos.  “I’ll continue to fight to keep our streets safe.”

Assembly District 40 includes the cities of San Bernardino, Redlands, Highland, Loma Linda and Rancho Cucamonga. Ramos won the 40th Assembly District in 2018 by 19%. Gavin Newsom won the district by over 7%. The latest voter registration numbers show that Democrats have a 10% registration advantage. Read more about the campaign at www.jamesramos.org.

Highland, CA – The James Ramos for State Assembly campaign announced his re-election bid with a strong showing of local support. This early support included elected leaders from across the district.

This early list of local endorsements shows that the Ramos campaign will continue their grassroots focus in 2020.

“When I was elected I made a commitment that I would focus on the key issues for this district – creating jobs, improving our schools, helping our local governments and keeping our streets safe – and I have maintained my focus,” said Assemblymember Ramos. “It is an honor to work with so many local leaders and I’m proud that they are supporting my campaign. I will continue to be a strong voice for the Inland Empire.”

Chris Carrillo, Chairman of the Board

Ramos won the 40th Assembly District in 2018 by 19%. Gavin Newsom won the district by over 7%. The latest voter registration numbers show that Democrats have a 10% registration advantage. Read more about campaign at www.jamesramos.org. 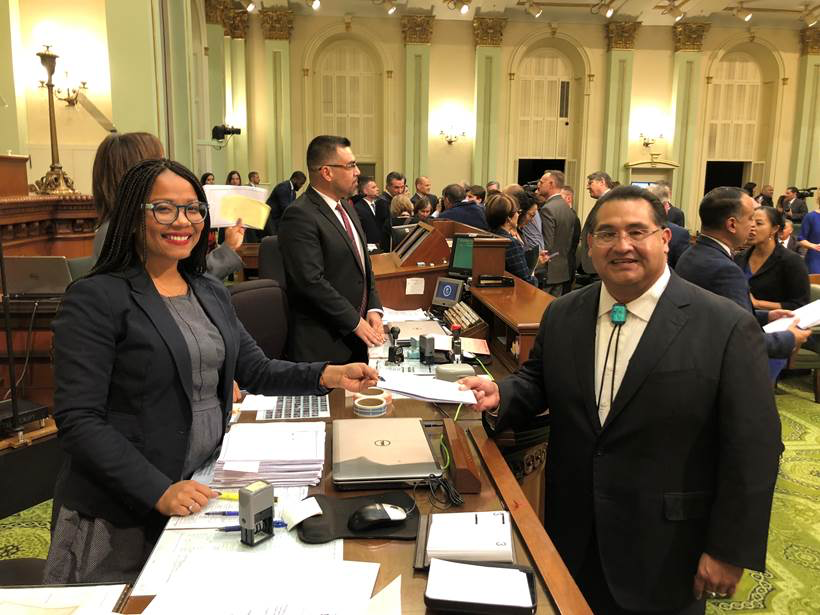 (Sacramento, CA) – Among his family and close friends, James Ramos was sworn in today as State Assemblymember of the 40th Assembly District, making history as the first California Indian from the Serrano/Cahuilla tribe to be elected to the Assembly.

“It is an incredible honor to have this opportunity to represent the 40th Assembly District,” said Assemblymember Ramos. “We celebrate today, but tomorrow we roll up our sleeves and get to work. I will use my experience of 13 years of local government, including my tenure serving on the San Bernardino County Board of Supervisors, to leverage resources from Sacramento to bring to our community and prioritize my efforts to foster economic development, address homelessness, advocate for homeless youth, social bullying, promote technical trades apprentice programs, improve education access and keep our neighborhoods safe.”

Ramos has deep ties to his community and is a proven civic leader. He was the first Native American to be elected to the San Bernardino Board of Supervisors and the San Bernardino Community College Board of Trustees. Ramos is also immediate past Chairman of the San Manuel Band of Mission Indians. 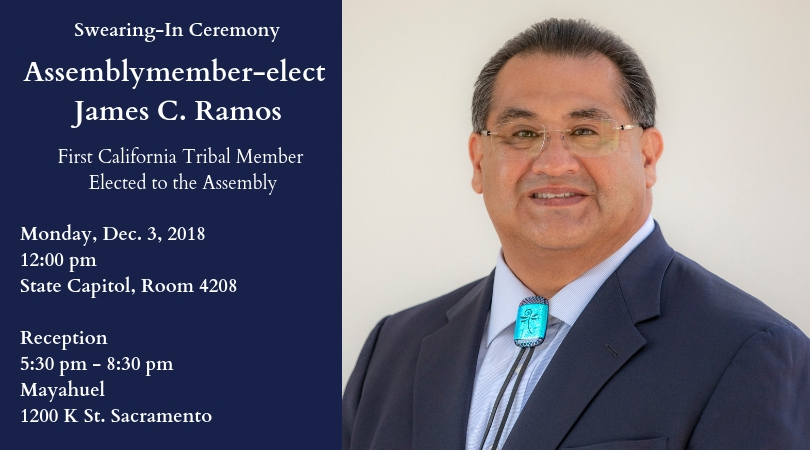 Friends, I’m excited to announce that this Monday, December 3rd, at 12:00pm I will be sworn in as the first California tribal leader elected to the Assembly. You can watch the ceremony online at: https://www.assembly.ca.gov/todaysevents
Details for the swearing in ceremony and reception later that day are on the flyer above. 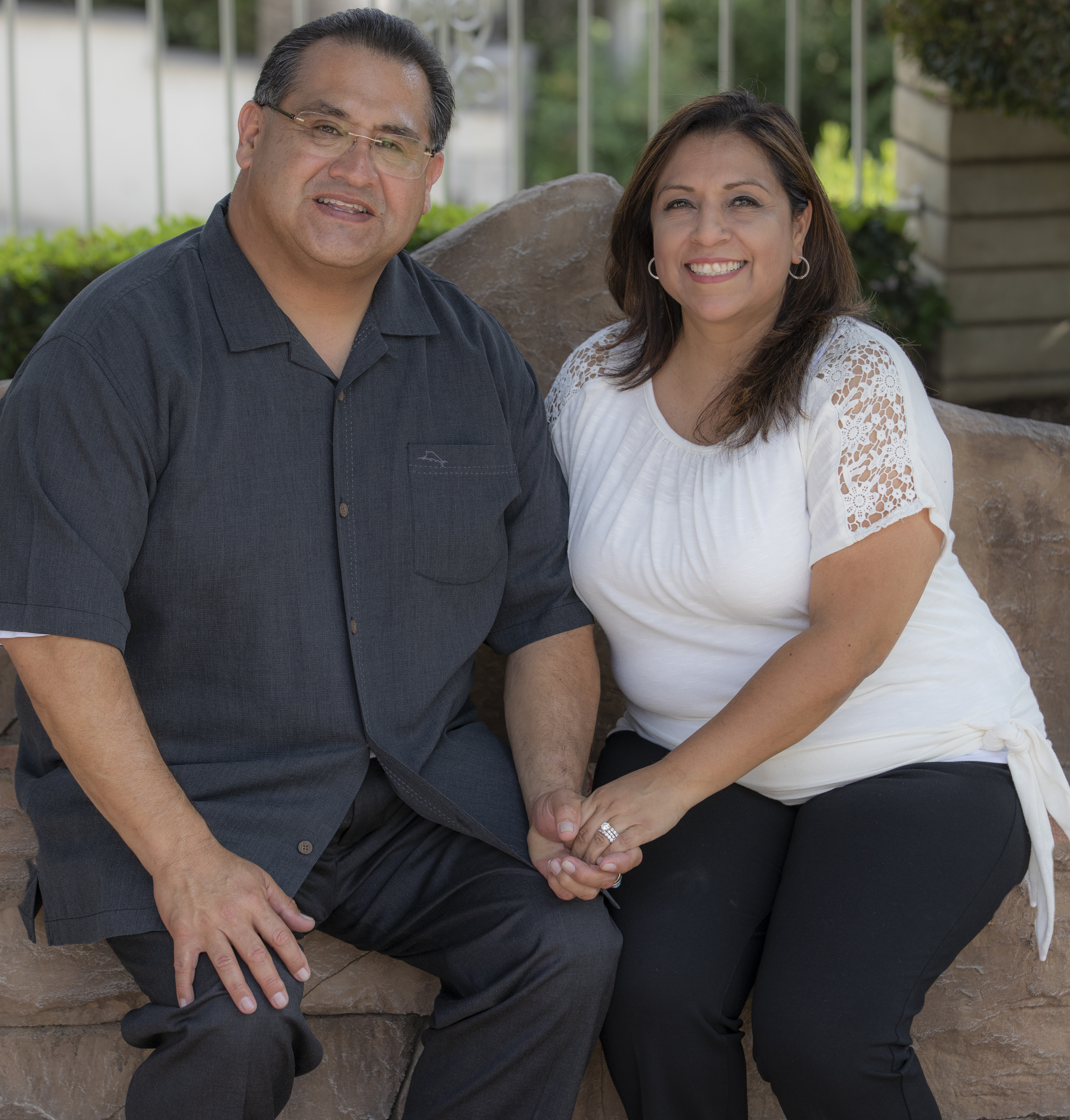 Thank you so much to the many supporters of this campaign. It was with your help that we got out thousands of yard signs, knocked on nearly 100 thousand doors and contacted countless voters through texts and phone calls. Thank you to all who joined me at the more than 25 meet and greets we held across the district to hear directly about the issues that matter most. I’m so proud of the results last night and I could not have done it without all of you.