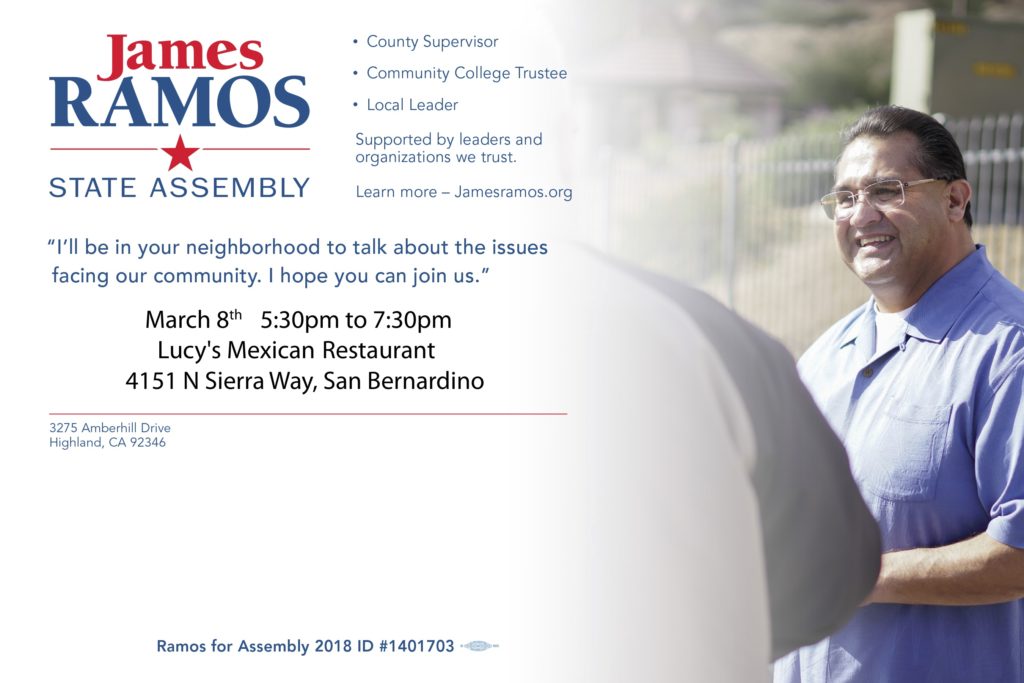 Steinorth has yet to respond to phone calls and e-mails from the Highland Community News.

The California Political Review quotes Steinorth as saying, “After two terms in the State Assembly I have done more than I ever imagined,” then questions what accomplishments he could claim after four years in the minority party.

And it says Steinorth should return the $65,750 the California Republican Party gave him on Jan. 4 for his Assembly re-election campaign.

The Assembly currently has 25 Republicans, 52 Democrats and three vacancies, giving the GOP less than a third of the votes.

Ramos shared Steinorth’s announcement in a press release on Monday.

The website marcsteinorth.com doesn’t mention his decision, but still invites contributions to his campaign.

Green Party member Carol A. Bouldin has announced her candidacy for the 40th Assembly seat, according to the registrar’s list. It also lists a candidate named Kenneth Petschow as a candidate for District 2 on the county board.

Highland is represented by Ramos in District 3. If elected, a vote to replace him is likely in November.

In a press release on Monday, Rutherford announced the endorsement of state Sen. Mike Morell, a Republican who represents Highland in the 22nd District. Rutherford was an aide to former state legislator Bill Leonard.

Before being elected to the Board of Supervisors in 2010, she served on the Fontana City Council for 10 years.

“I was born and raised in this community. As a tribal leader, a business owner, a community leader and as a County Supervisor, I have worked to make it a better place – targeting corruption and bringing transparency to the County Board while balancing the budget and creating a reserve. My focus will continue to be on the issues that matter to the Inland Empire – economic development, tackling homelessness, improving education and working with public safety to keep our communities safe,” said Ramos. “I have always worked in a bipartisan manner and that will not change in the State Assembly.”

James was born and raised on the San Manuel Indian Reservation. He grew up in a mobile home with his family. He learned a strong work ethic and followed a path to college, earning his associate’s degree at Victor Valley Community College, and his bachelor’s degree in Business Administration and Accounting from California State University, San Bernardino, before attending the University of Redlands where he earned a master’s degree in Business Administration.

Ramos has worked for both Republican and Democratic Governors.  In 2008, Governor Arnold Schwarzenegger appointed Ramos to the California State Native American Heritage Commission for which he is chairman. In 2011, he became the first Native American appointed to the State Board of Education by Governor Jerry Brown.

In addition to his elected service, Ramos is a proven civic leader and has served on numerous boards and organizations in the greater San Bernardino area.

James and his wife of 28 years, Terri, are the proud parents of four children and three grandchildren.

“As a tribal leader, a business owner, a community leader and as a county supervisor, I have worked to make it a better place – targeting corruption and bringing transparency to the county board while balancing the budget and creating a reserve,” Ramos, a Democrat, said in a news release.

“My focus will continue to be on the issues that matter to the Inland Empire – economic development, tackling homelessness, improving education and working with public safety to keep our communities safe.”

Ramos, who formed an Assembly campaign committee last month, is running in California’s 40th Assembly District, which includes most of Rancho Cucamonga and San Bernardino in addition to Highland, Loma Linda and Redlands.

Originally posted in The Sun